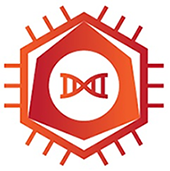 Burkitt Lymphoma (BL) is an aggressive type of B-cell non-Hodgkin lymphoma (NHL) first described in 1956 by Dr. Denis Burkitt in children from sub-Saharan Africa. Different subtypes of BL exist including endemic BL (eBL) and sporadic BL (sBL), amongst others. Geographic variability exists with BL subtypes; eBL being largely associated with children in malaria-prone regions. eBL is also strongly associated with the presence of Epstein-Barr virus (EBV); a known mechanism for development of lymphomas in BL. eBL patients are generally children who present with large tumors at the jaw and abdominal cavities. Treatment with chemotherapy largely cures many of these eBL patients where proper supportive care is available. However, eBL continues to be fatal in countries where access to proper care is limited, diagnosis at advanced stages is common and poverty/malnutrition is prevalent. sBL is a subtype of BL that occurs largely outside malaria-prone regions. Incidence for sBL is 10-fold lower than eBL1. sBL tumors commonly arise in abdominal and thoracic anatomic regions while large tumors of the jaw are rare. sBL is more common in adults in whom treatment can be more challenging despite considerable exploration by clinical trials. Thus, there is a continued need for better understanding of the genetic and molecular features of BL to facilitate the discovery of more effective treatments with lower toxicity.

While there have been many studies looking at different molecular pathways and genes, many of these studies are limited by small sample size, lack of background data such as geographic origin and other clinical data parameters necessary for holistic examination of cancer pathogenesis. The characteristic genetic hallmark of BL is constitutive MYC expression caused by a chromosomal translocation of MYC next to an immunoglobulin (IG) enhancer. However, additional genetic aberrations are necessary for BL to develop. EBV appears to play a strong role in the emergence of BL2though exact mechanisms are still unknown. In a recent publication in Blood, Grande and Gerhard et al.3 describes a large scale genomic and transcriptomic study of 106 pediatric BL cases (mostly from the Burkitt Lymphoma Genome Sequencing Project, BLGSP), comparing the molecular characteristics of EBV-positive and EBV-negative eBL and sBL tumors. The results support the requirement of EBV infection in eBL and detail important pathogenic differences and indicate potential roles of EBV in BL.

In this cohort, tumor EBV status grouped patients into different clinical subtypes irrespective of geographic origin. EBV-positive BL tumors had higher expression of the AICDA gene which codes for activation-induced enzyme cytidine deaminase (also known as AID). In addition, the study identified 70 genomic regions enriched for non-coding mutations. Many of these regions were associated with genes affected by aberrant somatic hypermutation (aSHM), a cellular process in which B-cells adapt the immune system’s immunoglobulin production to new foreign elements encountered by somatic hypermutation. Further examination identified AICDA expression correlating with the number of mutations in these non-coding regions. These findings suggest that non-coding mutations in discrete genomic regions are most likely due to the consequence of AICDA-mediated aSHM in EBV-positive tumors.

A number of additional non-coding mutation peaks not known to be targeted by aSHM were also identified; including a peak in the promoter of the PVT1 gene, a known target of MYC. These mutations were associated with the presence of EBV, but not with eBL status. Another peak was identified in a distal enhancer of PAX5, a transcription factor with a role in B-cell differentiation. These results suggest the possibility of AICDA contributing to BL by introducing non-coding mutations in regulatory regions. 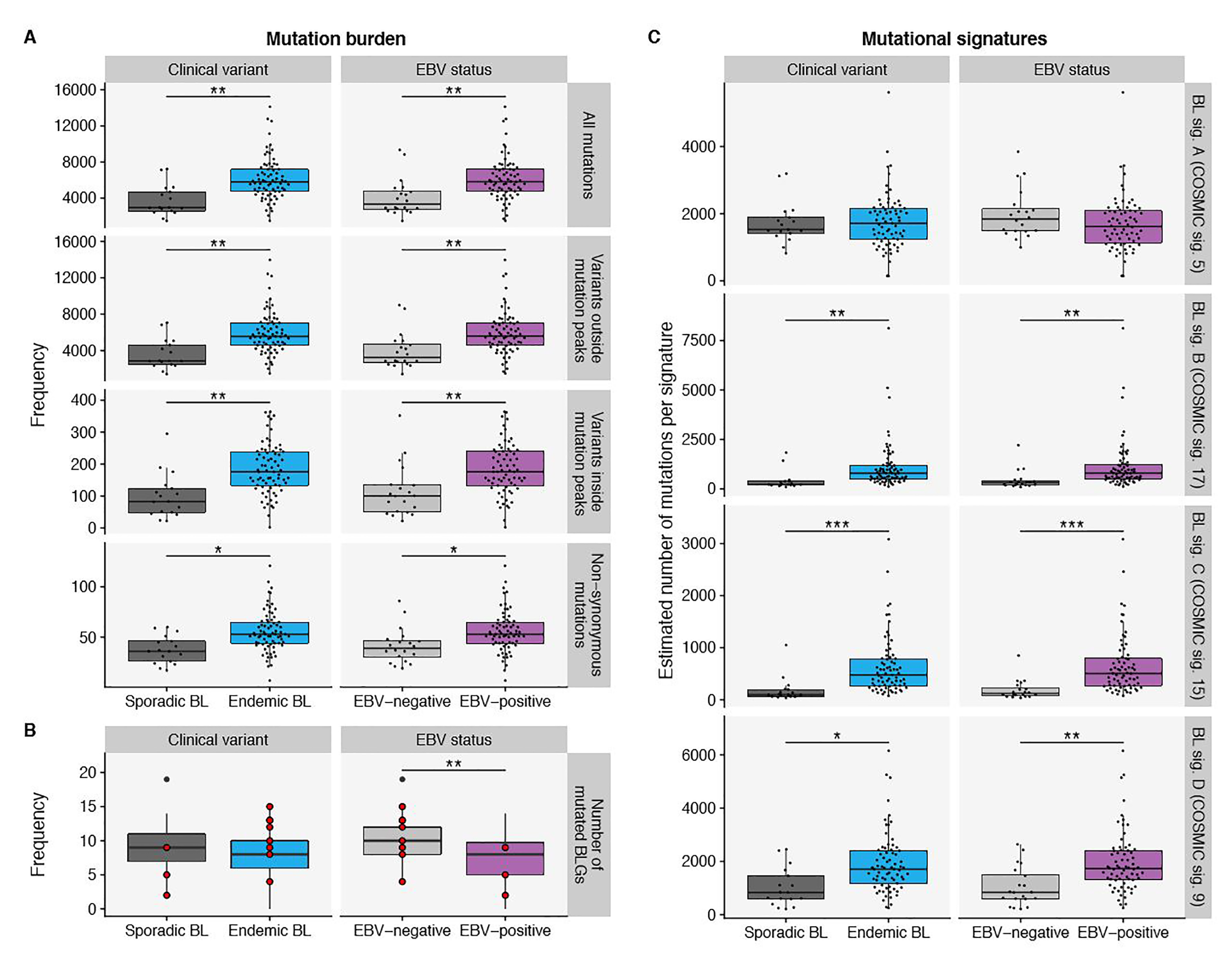 Figure: Mutational processes in BL. (A) Mutation frequency is shown for each disease subtype. From top to bottom, the following simple somatic mutations (SSMs) are considered in each tumor: all genome-wide SSMs; SSMs outside non-coding mutation peaks; SSMs within peaks; and non-synonymous SSMs in all protein-coding genes. This analysis was restricted to WGS data from the BLGSP discovery cohort (N = 91). (B) Number of BL-associated genes (BLGs) that are mutated in each BLGSP discovery and validation case (N = 120). All mutation types were considered. Discordant cases are highlighted as red points. The number of mutated BLGs was compared using Mann–Whitney U tests (**, P-value < 0.001). (C) Estimated number of single nucleotide variants is shown per mutational signature for each disease subtype in the BLGSP discovery cohort (N = 91). The four de novo mutational signatures (BL sig.) are annotated with the associated COSMIC reference signature (COSMIC sig.). ICGC cases were excluded to avoid the possible confounding effect lower sequencing coverage. Significance brackets (panels A and C): *, Q-value < 0.1; **, Q-value < 0.001; ***, Qvalue < 0.00001 (Mann–Whitney U test). (Adapted from Grande, Gerhard et al., Blood. 2019. doi: 10.1182/blood-2018-09-871418)

EBV-positive cases had fewer mutated BL-associated genes (genes that are recurrently mutated in BL) per tumor but there was no difference in the number of BL-associated gene mutations when eBL was compared with sBL. Yet, the total mutation load per genome was significantly higher in eBL and EBV-positive cases. This distinction suggests increased accumulation of driver mutations in EBV-negative BL and corroborates the role of EBV infection in promoting tumorigenesis. The study also finds a disparity in the prevalence of mutations affecting apoptotic genes associated with EBV status, but not with geographic origin. These findings are consistent with EBV suppressing apoptosis in BL cells.

To further investigate the underlying mutational processes leading to BL, de novo mutational signatures were generated yielding four distinct signatures or patterns of mutations. Comparing these four signatures (A, B, C and D) with reference COSMIC (Catalog of Somatic Mutations in Cancer) signatures, the study found that the A, B,C and D signatures corelate respectively with aging, unknown etiology, defective DNA mismatch repair (MMR), and AICDA and polymerase ƞ activity (Figure).  BL signature C was significantly associated with tumor EBV status but not with clinical variant status, suggesting a link between EBV and DNA mismatch repair. BL signature D was strictly associated with AICDA expression while neither signatures B nor D was correlated with AICDA expression. Overall, this suggests the increased mutational load in EBV-positive cases may be due to defective DNA mismatch repair and increased AICDA activity.

The findings from this BLGSP study demonstrate genetic and molecular distinctions between EBV-positive and EBV-negative BL as well as the role that the EBV plays in BL tumorigenesis. The findings highlight the potential utility of DNA-damaging chemotherapy in BL patients with disrupted apoptosis or defective DNA mismatch repair. EBV appears to be a vulnerable therapeutic target since EBV-positive tumors are reliant on EBV expression. Additional functional assays including CRISPR-Cas9 screens and other small molecular combinatorial experiments will be necessary to further understand the exact mechanisms that distinguish EBV-positive and EBV-negative BL.

Researchers from multiple institutions within the Burkitt Lymphoma Genome Sequencing Project (BLGSP) contributed to this research.