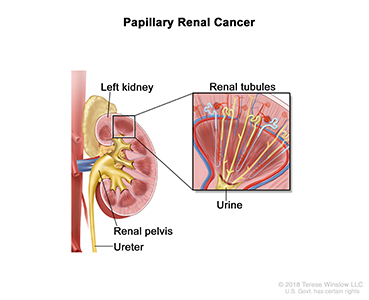 Purpose: A challenge in the diagnosis of renal cell carcinoma (RCC) is to distinguish chromophobe RCC (chRCC) from benign renal oncocytoma, because these tumor types are histologically and morphologically similar, yet they require different clinical management. Molecular biomarkers could provide a way of distinguishing oncocytoma from chRCC, which could prevent unnecessary treatment of oncocytoma. Such biomarkers could also be applied to preoperative biopsy specimens such as needle core biopsy specimens, to avoid unnecessary surgery of oncocytoma.

Results: Unsupervised clustering of Stanford and preexisting RCC data from The Cancer Genome Atlas (TCGA) revealed that of all RCC subtypes, oncocytoma is most similar to chRCC. Unexpectedly, however, oncocytoma features more extensive, overall abnormal methylation than does chRCC. We identified 79 CpGs with large methylation differences between oncocytoma and chRCC. A diagnostic model trained on 30 CpGs could distinguish oncocytoma from chRCC in 10-fold cross-validation (area under the receiver operating curve [AUC], 0.96 (95% CI, 0.88 to 1.00)) and could distinguish TCGA chRCCs from an independent set of oncocytomas from a previous study (AUC, 0.87). This signature also separated oncocytoma from other RCC subtypes and normal tissue, revealing it as a standalone diagnostic biomarker for oncocytoma.

Conclusion: This CpG signature could be developed as a clinical biomarker to support differential diagnosis of oncocytoma and chRCC in surgical samples. With improved biopsy techniques, this signature could be applied to preoperative biopsy specimens.