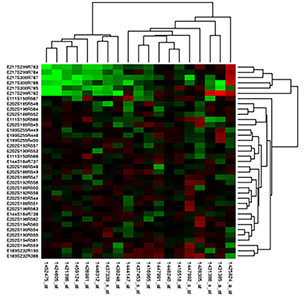 Purpose: Head and neck squamous cell carcinoma (HNSCC) is the sixth most common cancer worldwide with high mortality and a lack of targeted therapies. To identify and prioritize druggable targets, we performed genome analysis together with genome-scale siRNA and oncology drug profiling using low passage tumor cells derived from a patient with a treatmentresistant HPV-negative HNSCC.

Results: Many of the identified copy number aberrations and somatic mutations in the primary tumor were typical of HPV(-) HNSCC, but none pointed to obvious therapeutic choices. In contrast, siRNA profiling identified 391 candidate target genes, 35 of which were preferentially lethal to cancer cells, most of which were not genomically altered. Chemotherapies and targeted agents with strong tumor specific activities corroborated the siRNA profiling results and included drugs that targeted the mitotic spindle, the proteasome and G2/M kinases WEE1 and CHK1. We also show the feasibility of ex-vivo drug profiling for patients enrolled in a clinical trial.